Results from surveys and voter data show that voter turnout is at an all time high, and that vote by mail has made a large impact in the ways that Americans are casting their ballots.

The numbers are even more pronounced in presidential election years with 46 percent voting by mail in 2020, compared to 18 percent in 2016, Pew data from previous years show.

Voter turnout for the 2022 midterms was 46.8 percent, slightly lower than the 50 percent turnout in the 2018 midterms, but far higher than any other turnout in the last 50 years, according to data from the U.S. Elections Project.

The last time midterms turnout was higher was in 1970 at 47.3 percent.

Whether they voted in-person or by mail, the number of people who said they voted on election day fell from 85 percent in the 2002 midterms to 44 percent in 2022, Pew Research found.

While some MAGA Republicans still discredit election results, an overwhelming majority – 88 percent – of people are confident that their vote was accurately counted, Pew found.

Meanwhile only 53 percent of Republicans felt the same way.

This is likely the impact of the very partisan rhetoric over the last few years surrounding elections. In 2020, 94 percent of Biden voters said the election was run well compared to 21 percent of Trump voters who said this. 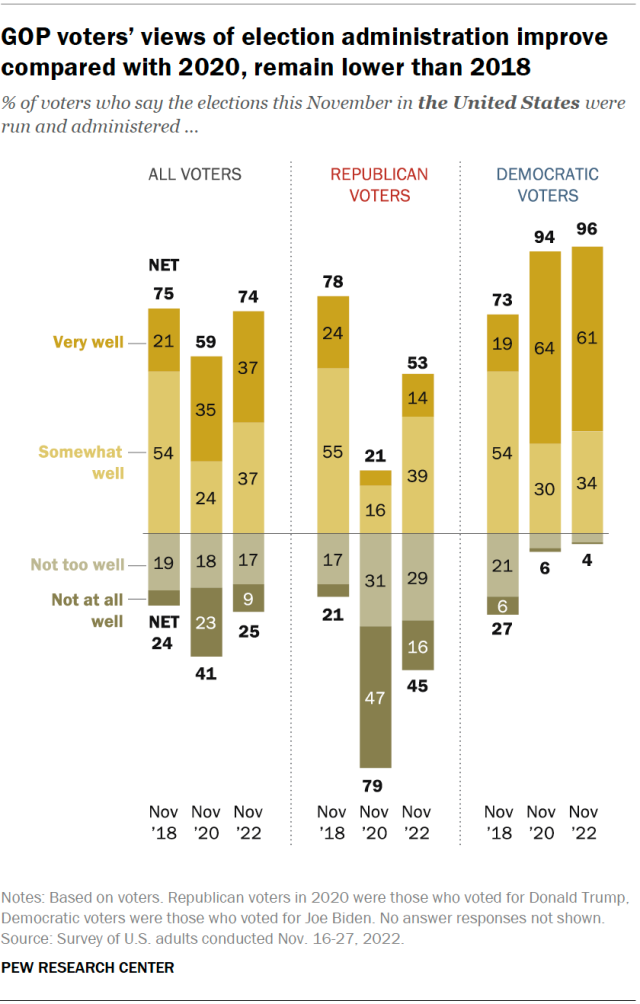 Pew’s recent survey results found that nearly a third of people feel Biden will be unsuccessful in getting programs passed, while 33 percent said he would be successful.

The results are nearly the same as those who responded in 2018 about Trump when he was president.